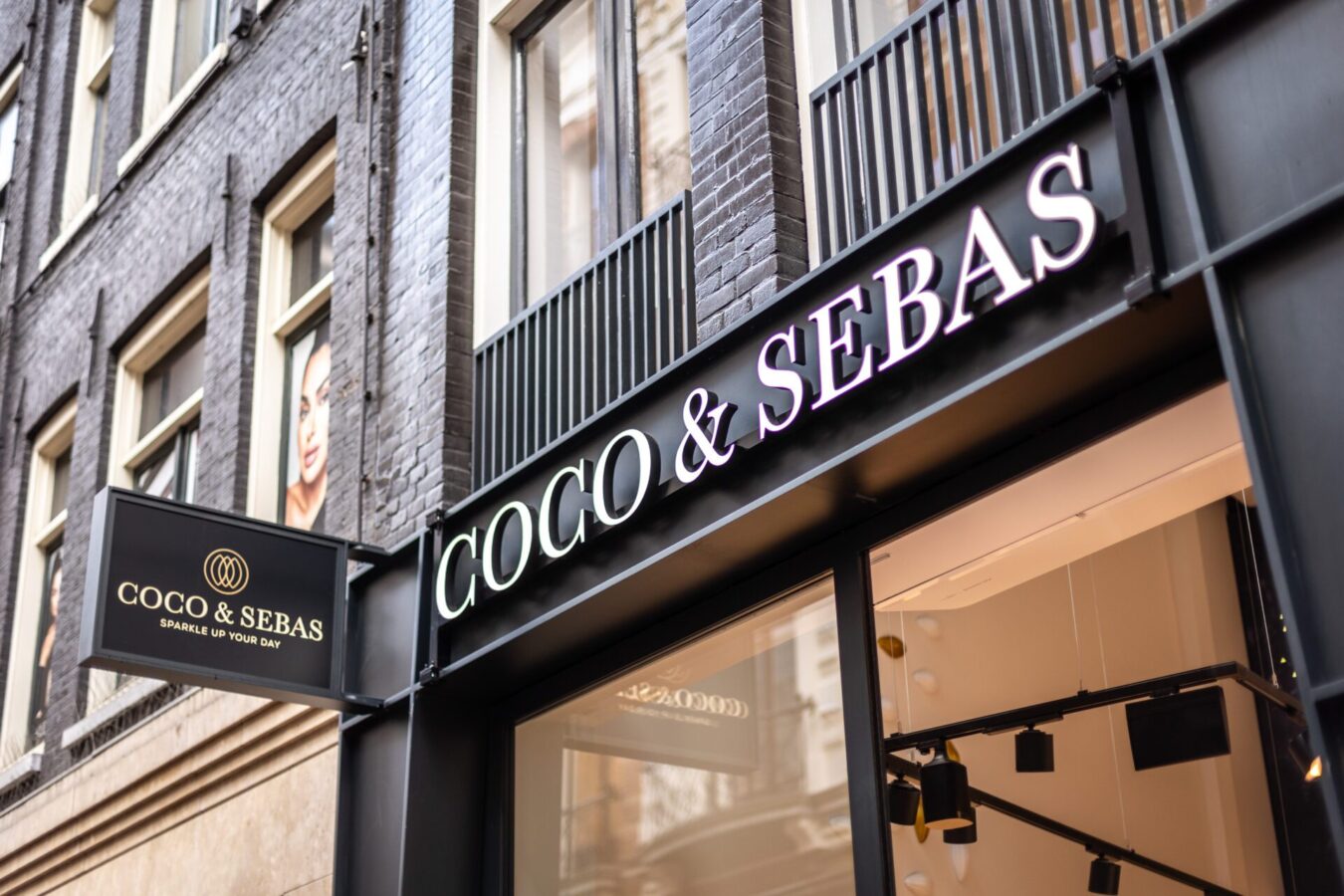 Seven shops, each with a unique signature to match the location, where everything revolves around chocolate and temptation. It would be very surprising to not see a lot more branches of Coco & Sebas open up. Remy Rombouts, founder and co-owner of the successful chocolate concept, is nowhere near finished. He aims to create more and even better shops.

He recently opened new branches in Amsterdam, Knokke, Amstelveen and Utrecht. What is the ultimate goal? “Who knows – the sky’s the limit,” says Rombouts. “The accelerated growth we have initiated this year could lead to much more. I have evolved from a chocolate maker into an entrepreneur and marketer. One thing I am not is a contractor. I’ve learned that sometimes you need to have the courage to let go. For instance, we’ve entrusted the construction of our shops to a specialist in that area.”

Rombouts is a pastry chef by profession but has also worked in sales. In 2017, he decided to return to his true passion: making chocolate. “Chocolate is a wonderful market, but one that was a bit old-fashioned in my opinion.” He came up with Coco & Sebas, a concept where the allure of pure chocolate is presented with a hospitality mindset. The temptation lies in the taste and product, the luxury packaging as well as in the shops themselves. “They have to exude just as much love, allure and luxury, and be appealing and accessible. The visual element is very important to us.”

After the first shop opened in Eindhoven in 2018, Rombouts continued to expand. He opened a branch in Best – the place where the atelier is located and production is carried out. The refurbishment was done in-house. “It became a high-end store, with plenty of black, marble and copper accents. Everyone loved it, there were plenty of people coming in. But sales were disappointing. Was the luxurious look of the shop too much, were customers hesitant to buy? We stopped after a year to reassess, concentrating on delivering to third parties. We still wanted to open shops.” 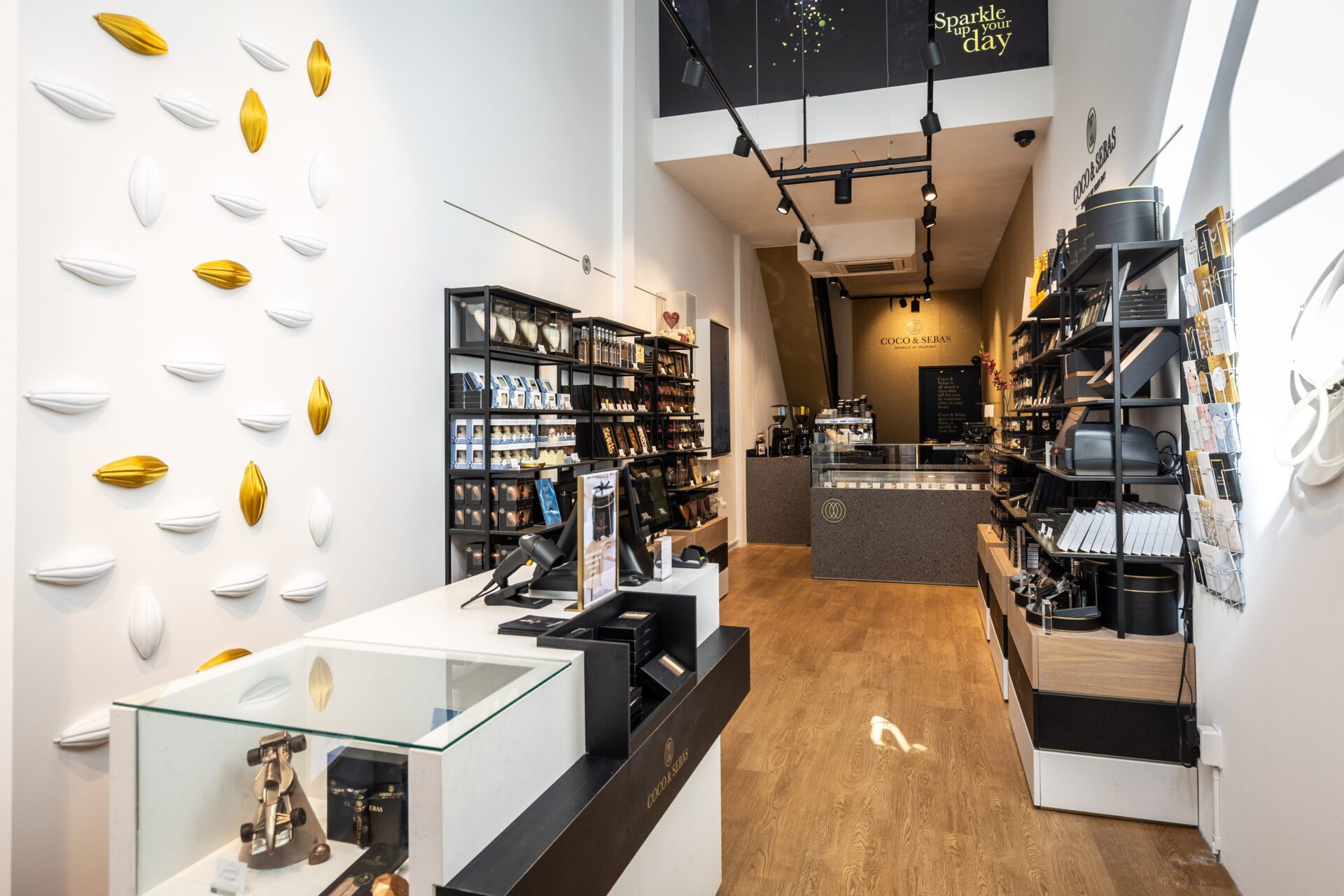 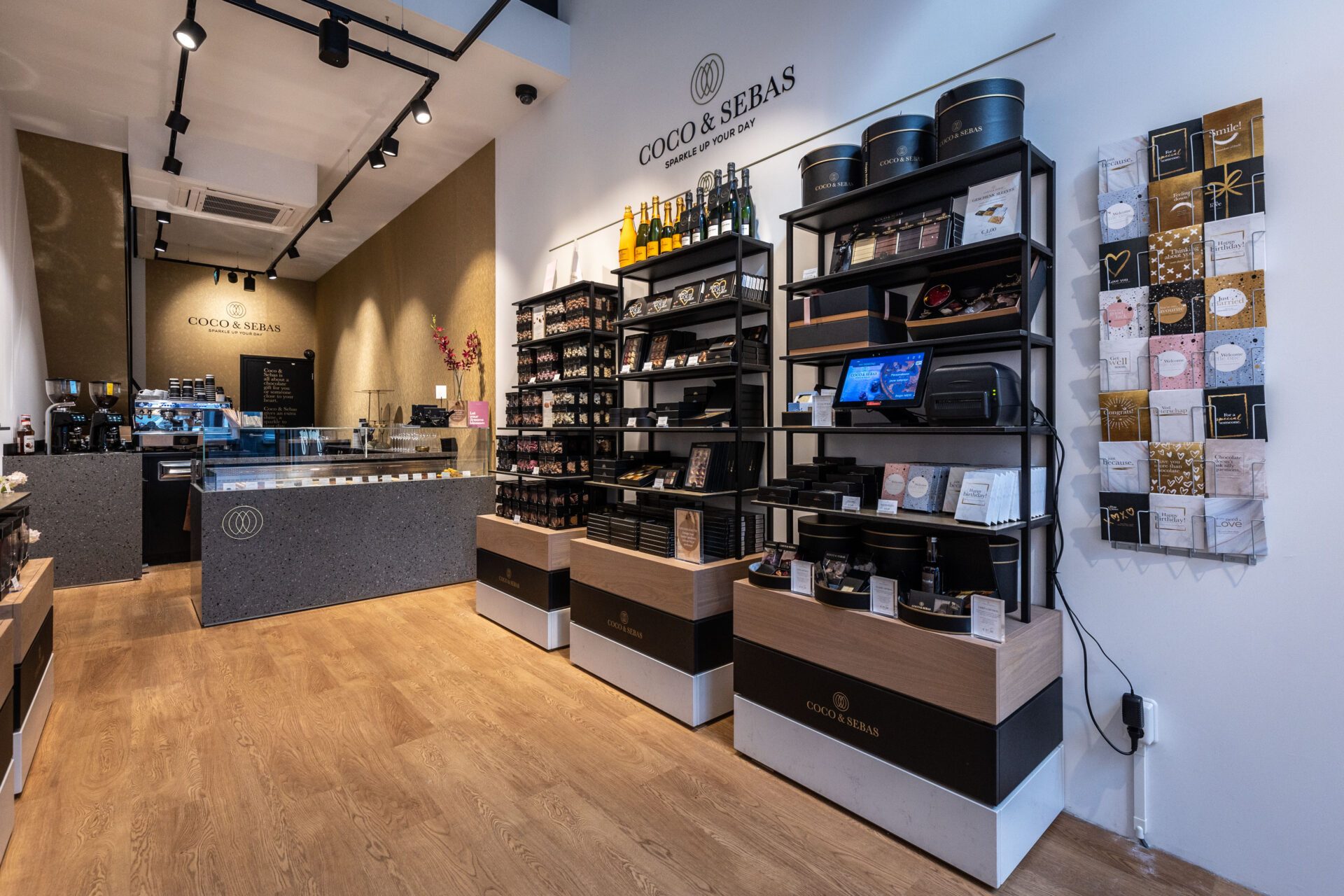 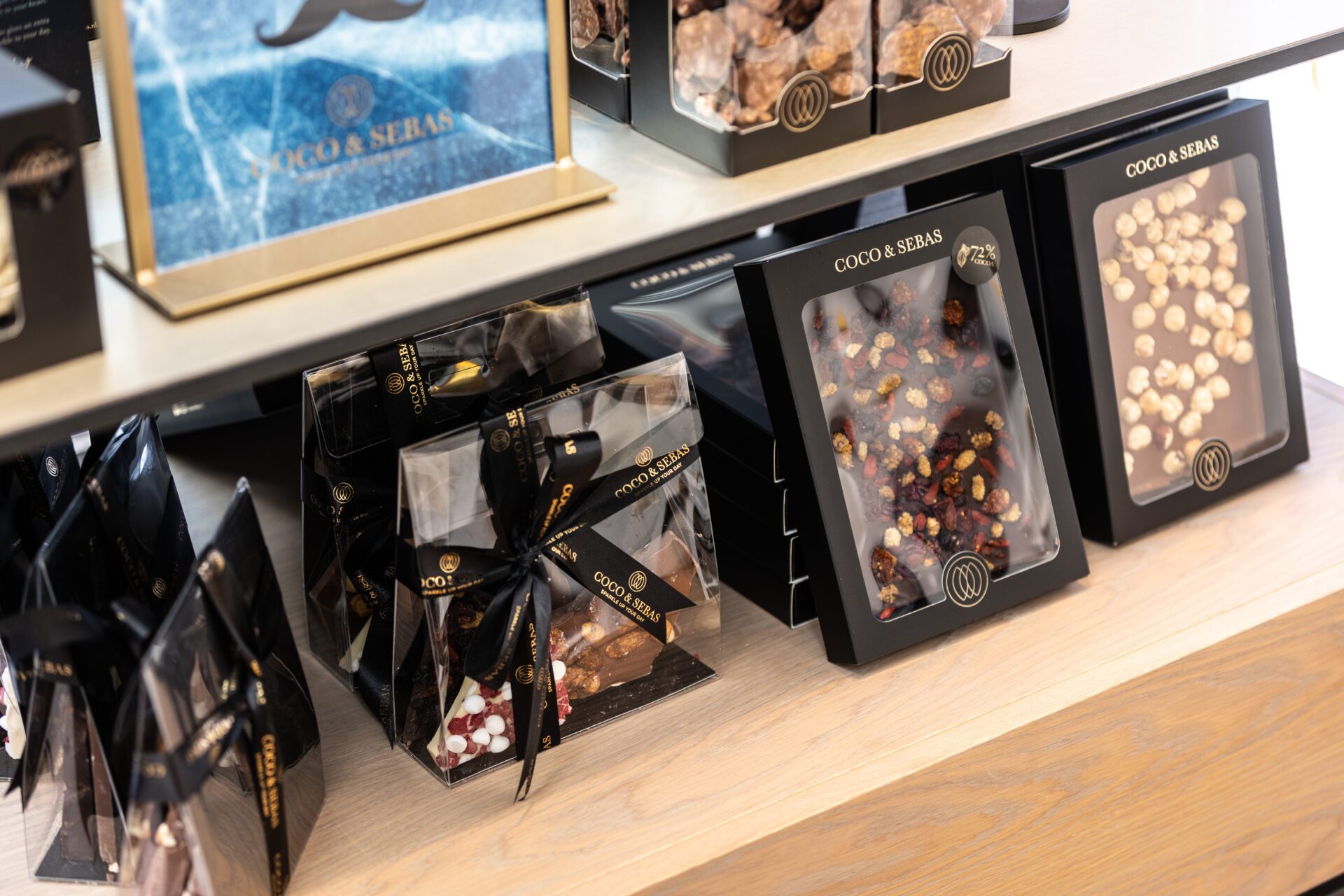 In 2019, a new shop was opened in Den Bosch on Vughterstraat, the place to be for handicrafts and specialty shops. Still alluring in its appearance, but not quite as over the top as in Best. The refurbishment was also carried out in-house here. “It was a daunting job, despite the fact that we were working with a dedicated contractor. We are no experts when it comes to air conditioning, installing electrics, wallpaper, ideal lighting designs and all those other things that go into furnishing a shop intelligently and creatively. Project management in that area? That’s not our speciality. You have to deal with so many hiccups and different suppliers. And everything is constantly under time pressure. You have to open on schedule. Once the shop was up and running, we went looking for a national player who could take on project management for us, a partner with a creative approach to hospitality.”

The choice fell on Bulsink, a construction company that has evolved to become a leader in this field with a hundred years of experience in construction projects. As a general contractor, Bulsink takes care of customer needs from the design phase to the ultra-fast implementation of retail, hospitality, leisure, office and care concepts.

We take care of every stage, from the drawing to the turnkey delivery,
- Britt Mutsers, Account Manager 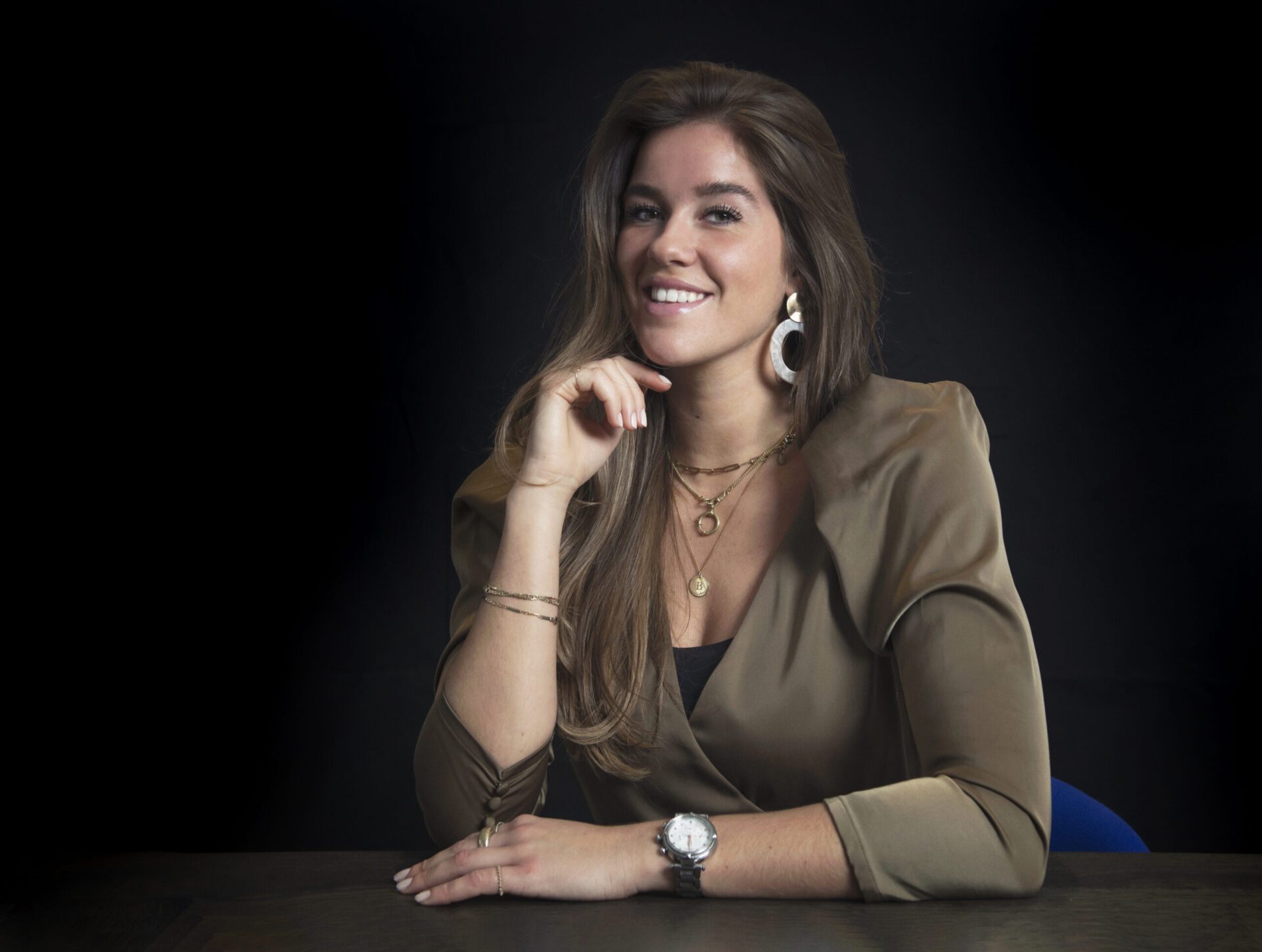 For the newest Coco & Sebas branch in Amsterdam, ideas were developed into a formula book in consultation with the owners, which included detailed designs as well as planning and prices. “This type of approach is appealing for us. For retailers like us who are working on several branches at the same time, they need something to hold on to, clear deadlines,” says Rombouts. 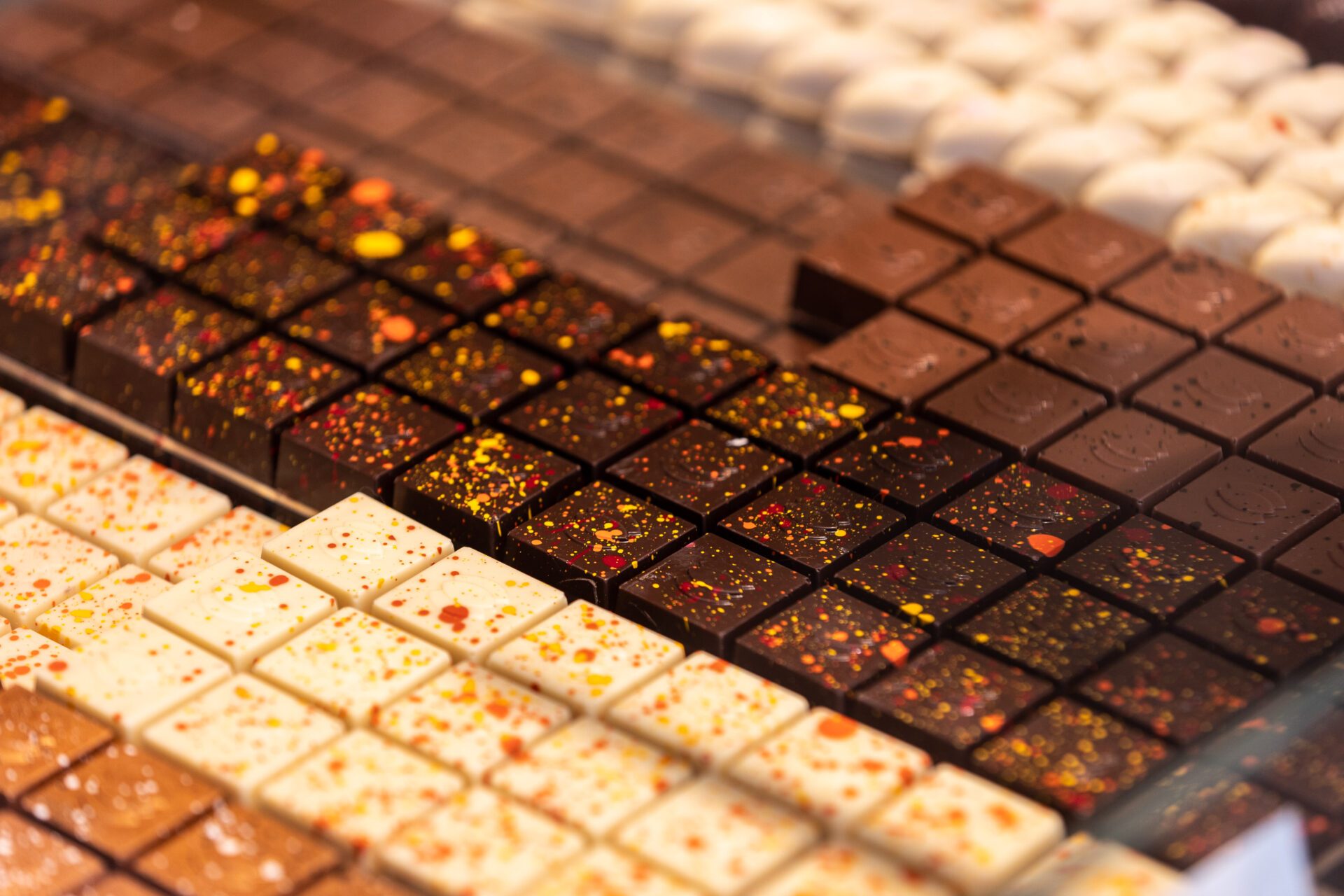 “In the past, I’ve even had to install part of the shop floor the night before the opening. Or the climate control solution chosen wasn’t suitable for the square metres in the shop. And the whole thing had to be dismantled. You don’t want that to happen! Nor do you want to argue with a subcontractor who has just wallpapered a room and then after you notice an air bubble, he says he can’t do anything about it because he’s not a decorator. As a client, you want a sense of certainty – it has to be done quickly and properly.” Britt Musters understands that. “Customers want to have everything taken care of, but they also want to have the best possible insight into the process. That gives them peace of mind. That’s why we make the process planning transparent and why we hold weekly construction meetings on site. We are also constantly on the lookout for new technologies for our clients.”

There are several aspects involved in finding a true match in a partner. In creativity, for example. Rombouts: “On the one hand, we are looking to standardise, to achieve the best possible awareness of our concept. We do that with the furniture, the signs and a good lighting plan. At the same time, we also want to give our shops some character, matching the ambience of the area, the local entrepreneurship. We often choose small locations, which can pose a challenge. It requires creative designs and customised solutions. It’s great to be able to switch gears quickly, to have a designer who is proactive with ideas and who shares solutions during construction meetings. The drawings were brought to life through technologies such as 3D design, virtual reality and augmented reality. The designer contributed ideas and solutions and could immediately share them. This makes you truly feel heard as a discerning client, because that is what I am. Handing over the construction of a shop is a major step, but it is certainly feasible if there is trust.”